Day of the Dead 2020
PET NEWS - BY DRAGONSAFTERDARK

The scent of marigold hangs heavy in the cool air, while laughter, music, and weeping intermingle amidst the headstones. You place the sturdy, white candle on top of the newly carved gravestone in front of you, then light the wick. The flame stutters to life, and then stills, unwavering. The aroma of freshly baked bread makes your mouth water, as you pull the skull-shaped loaf from your pack, and then place it gingerly next to the candle.

It’s not long before a familiar, whispering voice surrounds you, and the lightest brush on your shoulder sends goosebumps along your skin. The candle flickers in a breeze that’s not there, and when you look up you’re greeted by a smiling face. You can’t help the sting of tears in your eyes, but you give them a smile in return.


Happy Day of the Dead!

The veil has thinned, and it’s that time of year to visit your city’s graveyard to honor and celebrate those who have departed the world of the living. On Azeroth, Day of the Dead is a micro holiday that comes at the tail end of Hallow’s End, and offers us one pretty cool pet: Macabre Marionette. 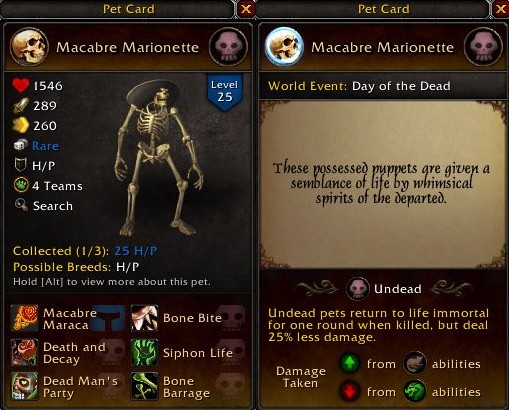 Armed with his maracas, sombrero*, and killer dance moves, this skeletal puppet is said to be animated by the spirits of our dearly departed.

One of the reasons this pet is fantastic to add to your collection, is because it has humanoid attacks, which are strong against dragonkin pets. With the pet being undead, it takes reduced damage from dragonkin attacks. Combine your Macabre Maraca with Shattered Defenses from Dead Man’s Party, and dragonkin enemies stand little chance of survival.

There is a quest chain to get this pet, which is only available during the Day of the Dead holiday, and it can be done once per character. This pet is also cageable, so if you’re not interested in doing the quest, pop on over to your local auction house!

How to Get Your Macabre Marionette

1 – Log in during the Day of the Dead event Nov. 1 & 2. The calendar indicates that the event runs until server reset on the 3rd, but we advise doing it on the 1st or 2nd in case anything goes sideways with the reset.

2 – Head to your race’s capital city:

I can’t verify where all the allied races would go, but from what I’ve seen in the comments it looks like the Nightborne can go to the Silvermoon City graveyard. However, either of the Dalarans or Shattrath consider the allied races as part of their ‘any race’. If you’ve done this chain on an allied race outside of the Dalaran(s)/Shattrath graveyards, let me know which one you went to, and I’ll update the article!

3 – Purchase at least one of each: Simple Flour (Cooking Supply Vendor) & Ice Cold Milk (Beverage Vendors or Innkeepers). Also while in the capital, if you haven’t learned the cooking skill yet you’ll need at least a skill of 1 for the Bread of the Dead recipe, so train that before you leave!

4 – Head to the graveyard of your city

5 – Use the emote /dance with the NPC Catrina for a super easy achievement. Purchase the Bread of the Dead recipe from Chapman, the male vendor near Catrina, as well as either an Orange Marigold, or a Bouquet of Orange Marigolds. The recipe requires a cooking skill of 1.

6 – Learn the recipe and cook the Bread of the Dead.

7 – Use your Orange Marigold or Bouquet of Orange Marigolds in the graveyard. Remember! The buff to see the dead from the Marigold items only lasts 30 seconds, so be prepared to accept the quest and turn it in quickly!

8 – You should now be able to see a ghost, Cheerful (insert city name here) Spirit, that offers the quest The Grateful Dead.

9 – Accept the quest and turn it in immediately. You’ve already made your bread, so you should be good to go!

10 – Congratulations! You now have your Macabre Marionette!

We wish you all a Feliz Día de los Muertos, and until next time: Happy Battling!


* Unfortunately, the Macabre Marionette's sombrero has been clipping through his skull for quite sometime. Hopefully Blizzard will get around to fixing it some day!